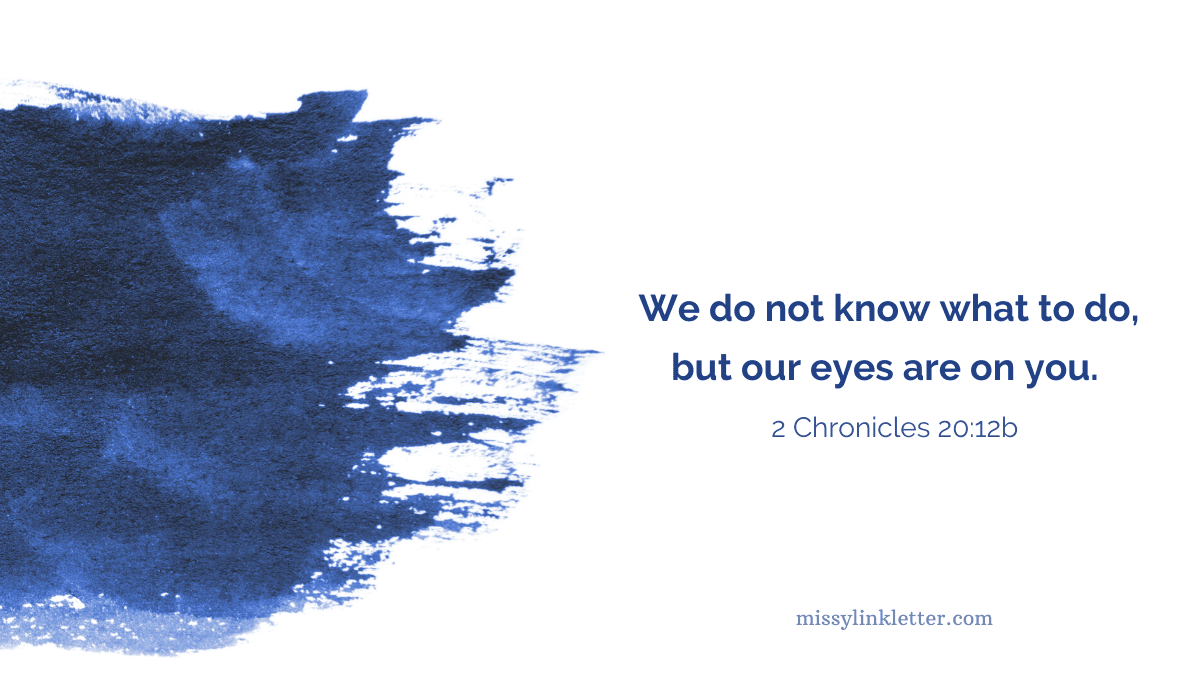 As I slipped out the front door for my morning walk, my mind was going a million miles a minute. I had awakened feeling overwhelmed and trepidation for the day ahead.

While I walked, I talked to God. In fragmented sentences, I poured out my heart. Fear was at the center of my thoughts. As I asked the Lord to help me to trust Him, Jehosaphat’s prayer came to mind, “We do not know what to do, but our eyes are on you.” (2 Chronicles 20:12b)

Finally, turning on my audio Bible app, I picked back up where I’d left off from the day before, Genesis 20-22. I’d been curious about Abraham because of a passage I read in James 2:23-24, “Abraham believed God, and it was counted to him as righteousness” –and he was called a friend of God.” Why I wondered, did God call him his friend?

As I listened to the rest of Abraham’s story unfold, I wept.

God told Abraham, “Take your son, your only son Isaac, whom you love, and go to the land of Moriah, and offer him there as a burnt offering on one of the mountains of which I shall tell you.” (Genesis 22:2)

Abraham rose early the next morning, saddled his donkeys, and took two of his young men with him, and his son Isaac. After three days of travel, Abraham “lifted up his eyes and saw the place from afar.”

“Then Abraham said to you his young men, “Stay here with the donkey; I and the boy will go over there and worship and come again to you.” (verse 22:5)

“And Abraham took the wood of the burnt offering and laid it on Isaac, his son. And he took in his hand the fire and the knife. So they went both of them together. And Isaac said to his father Abraham, “My father!” And he said, “Here am I, my son.” He said, “Behold, the fire and the wood, but where is the lamb for a burnt offering?”

Abraham said, “God will prove for himself the lamb for a burnt offering, my son. So they went both together.

Whey they came to the place which God had told him, Abraham built the altar there and laid the wood in order and bound Isaac, his son and laid on him on the altar, on top of the wood. Then Abraham reached out his hand and took the knife to slaughter his son. But the angel of the LORD called to him from heaven and said, “Abraham, Abraham!” And he said, “Here am I.” He said, “Do not lay your hand on the boy or do anything to him; for now, I know that you fear God, seeing you have not withheld your son, your only son, from me.”

And Abraham lifted up his eyes and looked, and behold, behind him was a ram, caught in a thicket by his horns. And Abraham went and took the ram and offered it up as a burnt offering instead of his son.

So, Abraham called the name of that place, “The LORD will provide”; as it is said to this day, “On the mount of the LORD it shall be provided. (Genesis 22:6-14)

My question answered was answered; Abraham was a friend of God because he believed God, this is faith.

Tonight, as I write, I have no further clarity about the future. No one does, really. But, I want my faith to be like Abraham’s. And right now, He says, “Child, trust Me.”

Lord, though we don’t know what to do, our eyes are on the You.